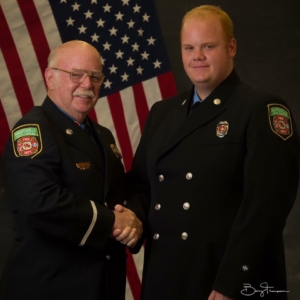 Bill and Oliver Segars represent many of the families that have a legacy of being involved in the fire service.

Bill and Oliver Segars are both actively serving Hartsville Fire Department and together have a combined total of 45 years of service. Bill is a Volunteer Lieutenant and Oliver is Full Time Lieutenant. They both speak very highly of the fire service and say that it is a brotherhood like no other. This strong family connection in the fire service is partly due to the fathers of the families bringing their children up in the fire station. The Segars family had a Saturday ritual that consisted of coming downtown to eat breakfast and then stopping by the fire station to visit with those on shift and play around on the fire trucks. During this time, Bill saw to it that all of his kids exhibited a great deal of respect for others and therefore continued to be welcomed at the fire station.

As Oliver got older, he would tag along with Bill on every call that he possibly could. He would hear the tone go off, get dressed, and get down stairs as fast as he could to meet his dad and head to the call where he would wait in the truck until it was safe for him to come out. Bill said, “Oliver always showed a great deal of interest in the fire service without ever being pushed in that direction.” Bill just helped guide him along the path to one day make his own decision to be involved in the fire service.

Fast forward many years later. Oliver is now a full time lieutenant and it is clear that his dad is quite proud of him and his service to Hartsville as a firefighter. The pair have a bond that is different than just father/son or coworkers. They trust one another on many different levels and if given the choice, they would always pick the other to go into a burning building with.

This father/son duo is proud to follow in the footsteps of many others that have made the fire service a family affair. The nine other families that have been involved in the fire service together have served as excellent role models for this pair and they hope to inspire more future generations. Oliver is the father of two sons, Bryce and Gardner, and is excited to be able to show them the brotherhood and the importance of the fire service, but plans to lead them by example just as his father did for him. Hartsville certainly is fortunate to have a group of individuals that are ready and willing to serve when called. The bond that the entire group of firefighters has is quite incredible, but the amount of people that go the extra step to lead by example in their own families is what makes the fire service unique from the rest, in turn benefiting the citizens that they serve. 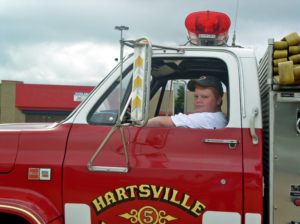 Oliver Segars, 13 years old, poses in one of the HFD Fire Trucks. 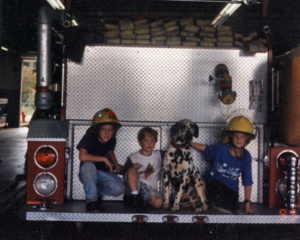 Hartsville Fire Department has played a role in the lives of many children as they watched their fathers’ involvement in the fire service. L to R Ryan Burr, Oliver Segars, Sparky Segars, and Tyler Segars pose on the back of one of the HFD Fire Trucks. 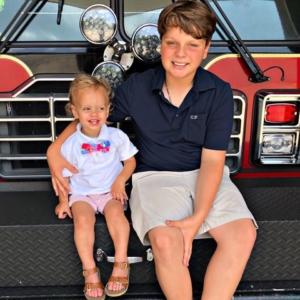 Oliver’s sons, Gardner and Bryce Segars, visit their father at the Fire Department.