Screen on the Green returns with showing of “Annie,” sponsored by Sheriff Wayne Byrd

Screen on the Green returns with showing of “Annie,” sponsored by Sheriff Wayne Byrd 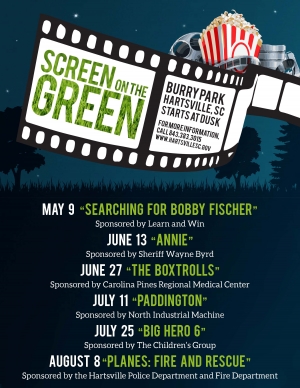 The City of Hartsville’s Screen on the Green free movie series will continue  Saturday, June 13 with a showing of the 2014 version of the classic musical “Annie,” sponsored by Sheriff Wayne Byrd. The movie showing will take place in Burry Park, 131 Cargill Way, at dusk, 8:35 p.m. or later.

The 2014 update of the musical moves the story from the New York City of the Great Depression era to the New York of the present day. Annie Bennett (Quvenzhané Wallis) lives with other girls in a foster home run by the uncaring Miss Hannigan (Cameron Diaz) and dreams of finding her parents. After her life is saved by wealthy businessman Will Stacks (Jamie Foxx), she is adopted by Stacks, first in a cynical effort to boost his failing political campaign, but eventually out of genuine affection. The film is rated PG for some mild language and rude humor.

Moviegoers are invited to bring chairs and blankets to Burry Park. In the event of rain, the showing will move to Byerly Park’s Coach T.B. Thomas Sports Center, 701 W. Washington St. in Hartsville.

After this second date of the Screen on the Green season, the series will continue every other Saturday until early August. The remaining dates are: