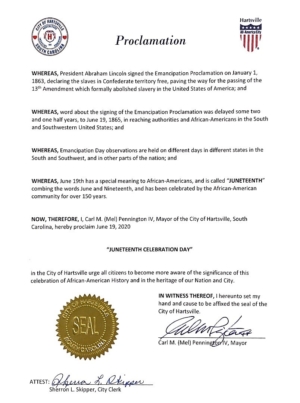 Juneteenth combines the words June and nineteenth and has been celebrated by the African-American community for over 150 years. Juneteenth is known as the day that word of Abraham Lincoln signing the Emancipation Proclamation spread to reach authorities and African Americans in the South and the Southwestern United States. The Emancipation Proclamation was signed on January 1, 1863, declaring slaves free, and it paved the way for the passing of the 13th Amendment, which formally abolished slavery in the United States of America.

As we reflect on the significance of the Juneteenth holiday, we will continue to work to create a better and more equitable future for our citizens. We want to be a city that is known for being caring, friendly, and accepting to all.