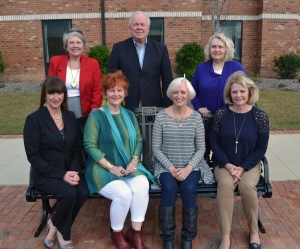 On the occasion of its 50th class reunion, Hartsville High School’s Class of 1965 has donated a new downtown sidewalk bench to the City of Hartsville.

Class committee member Brenda Newsome said the idea to provide the gift came when the committee realized that they had remaining funds after their reunion took place.

“We brainstormed about what to do with the funds,” Newsome said. “We wanted something memorable, like the ‘H’ on the former Hartsville High School campus, now the location of Thornwell School for the Arts. We really wanted something that would be a part of the entire community – past, present and future generations – and not hidden away on a campus or a wall somewhere.”

The group found inspiration in the downtown bench project of the 2014 class of the Greater Hartsville Chamber of Commerce’s Leadership Hartsville program, where class members had raised funds to install the durable metal benches now found lining the sidewalks of Carolina Avenue from Fourth Street to Sixth Street, aimed at enhancing the welcoming and attractive qualities of the downtown district. After the Chamber connected them to the City leadership, they found that their existing funds covered roughly half of the nearly $1,500 cost of one of the benches. Within hours, the class committee members had contributed the remaining money. Their bench will be one of those installed on the newly streetscaped section of South Fourth Street.

The class members also wanted to issue a challenge to other Hartsville High School classes to sponsor a downtown bench, including at least one representative class from each decade. Anyone interested may contact the City of Hartsville at 843.339.2867.