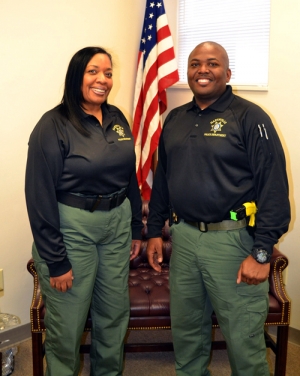 For Hartsville police officers, opportunities to connect with the residents they serve may come through many paths. Some have unfolded over many years, like public safety meetings and National Night Out events. Others have developed recently, like a growing use of bicycles and foot patrols, and the “Coffee with a Cop” program, inviting residents to sit down for informal meetings with officers to discuss anything of concern in Hartsville.

Now, the Hartsville Police Department will take on a major new avenue of outreach. Known as the Hartsville Safe Communities program, this effort will be led by one department veteran, Lt. Tenyonde Richardson in the new position of Community Outreach Lieutenant, and will receive support from department newcomer, June “Jaye” Gullett in the newly established role of Community Liaison Officer.

From 2011 until this January, Richardson led the department’s Patrol Division, supervising officers who work their shifts throughout the streets of Hartsville every hour of the day. He said that this background will inform his new focus, bridging the gap between police and community.

“That’s going to be the main focus — working with the community, trying to hear some of their concerns and solve some of the issues that they see,” he said.

Hartsville Safe Communities will be a proactive, data-driven outreach effort which will seek out repeat offenders and help them find ways to turn their lives around. It is modelled on programs which have proven their success elsewhere, such as the Aiken Safe Communities initiative, which drove down crime rates in that city. The Police Department has been working closely with the City of Aiken’s Public Safety Department as well as U.S. Attorney for the District of South Carolina Bill Nettles and his staff in the development of this new program.

The other officer who will take a critical role in these initiatives, Jaye Gullett, also brings a meaningful background to the work. A native of the Bronx in New York City who has also lived in Los Angeles and Atlanta, she said that she’s now more interested in smaller communities and the opportunities they give for connections among neighbors. Recently, she has held law enforcement positions, first with the Darlington County Detention Center and then with the Darlington County Magistrate’s Office, where she served as a Constable. Gullett said that when she read the job description for Hartsville’s Community Liaison Officer, she became excited about how well it matched with her love of service.

“Police work is the nucleus of a healthy-running community,” she said. “It’s part of what holds a successful community together. We’re just a part of that, so we need the community, we’re part of the community. I think our goal is to distill that ‘us’ and ‘them’ [mentality]. It’s not us and them,’ it’s ‘we.’”

Richardson and Gullett will begin appearing more at meetings at churches and schools, as well as at Hartsville’s apartment complexes. They, along with other Hartsville officers, will be at the next “Coffee with a Cop” session, taking place Tuesday, Feb. 23 from 8 to 10:30 a.m. at Shoney’s Restaurant, 905 S. Fifth St. in Hartsville.

Gullett described the effort of bridging gaps between Hartsville’s police and its residents as an ongoing process which will require some patience, but one leading to an attainable and exciting goal.

For more information, or for questions and concerns, contact the Hartsville Police Department at 843.383.3011 or visit its office at 135 W. Carolina Ave.