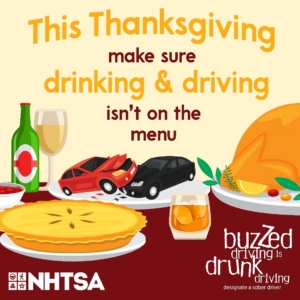 The Hartsville Police Department will be participating in the 2020 Thanksgiving Holiday Campaign administered by the National Highway Traffic Safety Administration (NHTSA).  The campaign will run from November 25th – 29th and will focus on the aggressive enforcement of impaired drivers.  According to NHTSA, from 2013 to 2017, more than 800 people died in alcohol impaired driving crashes during the Thanksgiving holiday period, making it one of the deadliest holidays on our roadways.

Hartsville Police Department’s mission is to make sure we do our part to educate the public on the dangers and consequences of impaired driving. The DUI officer and patrol team hope to make the roadways of the City of Hartsville safer by cracking down on offenders that put themselves and others in harm’s way by driving impaired. This team encourages you to please be safe and include a designated driver in your plans this holiday season.  Happy Thanksgiving from the Hartsville Police Department!